Living in Spain, warts and all

Almost like Doctor Who but much less famous and far more dangerous! And, regrettably, incapable of time travel, or I really wouldn’t be sporting these wrinkles…

I, in a moment of celebratory fervour, made a New Year’s resolution to renew my acquaintance with the keyboard. OK, I will hold up my hands and confess that I’ve left it a while to action this lofty declaration. Especially since I made it in 2013.

But apparently people occasionally still read “Bitten by Spain”, the book. Who knew? Some even buy it, although this latter group is but a very tiny subset of the first.
So perhaps it can be inferred that maybe people still enjoy sitting in their fave book corner, reading about my various struggles and calamities and thanking their own personal Divine Being that they’re not me!

To that end, I have made a firm promise to my current literary line manager, the inimitable Jack Scott of the fabulous “Perking the Pansies” (book and blog) fame. I promised that I will once again resume the weekly blogging. I have resolved to keep that promise, and have further resolved to hold fast to that resolve. As far as circumstances allow, that is…

First, I guess I owe some sort of explanation for my prolonged lassitude, and so I’ll try to present a brief resumé of some of the larger of my pathetic excuses for having vacated these hallowed halls for in excess of two years, as follows:

Given the normal strains of colliding periodically whilst living two fairly separate and very different lives (see The Part-Time Wife….), the 24/7 exposure has left us arm-wrestling ever since:

2) We lost three members of our canine family in uncomfortably rapid succession – first, the gentle and elderly Lady Jade, followed by my partner in crime and fall guy, the giant Marcos, and finally the slightly mad and always hungry Qivi. Each and every one of them tore my heart to shreds, but Marcos – aaahh, Marcos – I still haven’t quite got over losing him, and I’m not sure I ever truly will. I wrote about him almost constantly, and was lost without him…; 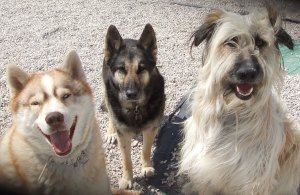 3) Of course, a leopard doesn’t change its spots, and so I am still prone to farcical accidents. There have been a few in the last couple of years, including a car crash which was really, really, really not my fault in that I was T-boned on my road by a guy ignoring a clear give way sign. I also managed to break my wrist when I fell from a small step-ladder whilst reaching too far (which was entirely my fault). But I topped all mishaps thus far (ever in my life, that is) with the latest, which I will report to you in a more leisurely fashion at a later date. Suffice it to say that I currently have full use of one arm only, which makes typing a slightly more tedious and error-prone exercise;

4) The kennels business turned out to be a high-performance beast – it roars like a lion and did nought to sixty in two seconds. A business with no let-up, I ran it pretty much single-handed for the first year, leaving me scarcely time to draw breath until John arrived.

At which point we (The Management) found that we had very different views about marketing, pricing and various other aspects of the thing. So we called a management and strategy meeting (a.k.a. the afore-mentioned arm wrestling contest) and I was subsequently voted off the board. So John now runs the business (and is, indeed, making a fine and splendid job of it) while I fill a back-up role in the accounts and information technology departments, which leaves me a lot more free time and therefore little excuse;

5) My outstanding son and his utterly wonderful wife became pregnant last June, and so I have been travelling much more.

I am currently, therefore, writing this from the UK, as my first grandson Oliver was born last Thursday. Of course, it wasn’t without its hitches – Rache has married into my family, after all – and he was in fact delivered by emergency Caesarian with his umbilical cord wrapped around his neck, and had to be resuscitated. They are all fine now, though Rache will need a few weeks yet to be considered fully recovered, and the family unit has already meshed nicely. I am more than blessed to be here with them and able to share so much of it. 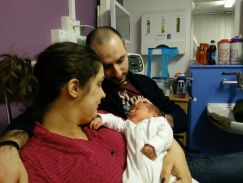 I only hope devoutly that I’m not a bad influence, and that Ollie doesn’t mean to go on as he started…

Excellent blogs that may also interest you